The VS1912 supports video wall configurations with up to 12 displays and allows you to design imaginative, creative video walls in various asymmetric configurations. With custom widget tools, you can add banners, video playback, flash media, images and real-time clock displays overs traditional media. The Advanced Video Wall features allow you to resize, layer (including Picture in Picture), span across multiple screens and even rotate pictures and videos at 90° intervals. The sky's the limit!

Multimedia files are uploaded and the system is set up from a computer connected across a network. With a built-in web interface and intuitive GUI (Graphical User Interface), access and configuration is simple and does not require extra software. The VS1912 also features a scheduling function that helps you create detailed playlists days, weeks, or even months ahead of time.

In addition, the VS1912 is equipped with two bi-directional RS-232 serial ports for controlling the connected displays, an HDMI input port for routing an additional HDMI source and USB 3.0, 2.0 ports for importing profile settings and schedules. With these features, the VS1912 has the flexibility to meet the needs of a wide range of environments, such as trade shows, lobbies, conference halls, shopping malls, and any other public space requiring truly dynamic video displays. 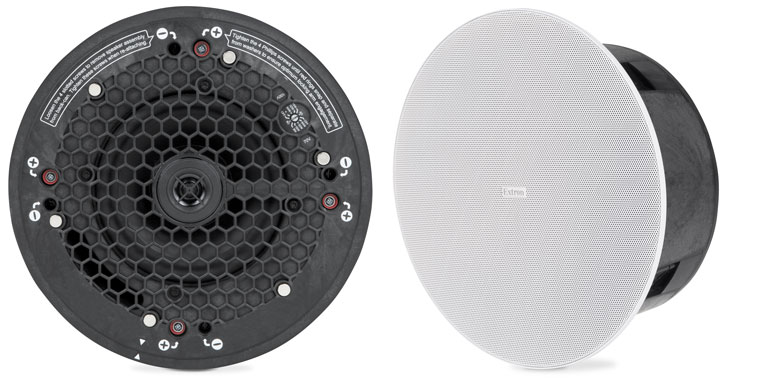 The Extron SoundField® XD model SF 26CT LP is a low profile 6.5" two-way ceiling speaker featuring a 4.2" (107 mm) deep composite back can for use in restricted height plenum environments. The driver complement includes a 6.5" (165 mm) woofer coupled to a 3/4" (19 mm) ferrofluid-cooled dome tweeter. It may seem bizarre to say it, but a wireless network still needs cables. All the different parts of a wireless network, such as the access points, the amplifiers and antennas, all need cables to communicate with each another.